Until further notice, the King County Family Law Information Centers in both Seattle and Kent are suspending walk-in hours and will be assisting people by phone only at the following numbers from 8:30 am to 12:00 noon:

The New Hope Act (Chapter 331 of the Laws of 2019) became effective on July 28, 2019 and makes substantial changes to the rights and procedures for clearing criminal misdemeanor and felony conviction records in Washington State.

Among these changes are improved notice requirements for the Department of Corrections and the clerk of the court; the ability to vacate Assault in the second degree, Assault in the third degree when not committed against a law enforcement or peace officer, and Robbery in the second degree under specific circumstances; and the removal of restrictions based on prior vacations and the modification of restrictions based on prior restraining/protection orders.

For instructions and forms related to these new provisions, visit the New Hope Act portion of the Civil Survival web site.

The King County Office of Public Defense has announced a new initiative to help people remove eligible convictions from their record.  Eligibility depends on the type of conviction (many misdemeanors and non-violent Class B & Class C felonies) as well as the amount of time that has passed since the conviction – among other things.

The Seattle Times published a good article on the announcement, which can be found HERE.

Information on the Office of Public Defense can be found HERE.

Many Seattle homeowners are unaware that their property may have restrictive covenants (dictating what types of people can own the property) attached to it that are based on outdated, unenforceable and racist policies from the past.  But beginning January 1st of 2019, homeowners can ask the King County Recorder’s Office to modify any of their deeds that contain such language.  Read the Seattle Times article HERE.

A common refrain in homeless services is that Seattle’s strength — a large number of nonprofits working to take care of homeless people — is also its weakness. In 2017, King County was home to 77 organizations that shelter or house homeless people. That’s 25 more than the city of San Francisco, and more than the entire state of Montana.

If you’re homeless, navigating this vast network can be hard. That’s why Real Change released a pocket guide to services for homeless people.

This durable and comprehensive pocket-sized booklet puts 132 slim pages of essential resources at the fingertips of homeless and very low-income people. New editions of the Emerald City Resource Guide will be published at least annually to keep services reliable and accurate.

The guidebook will list services such as health care, shelters and meals — and also features special sections for help with LGBTQ resources, culturally specific services and assistance with immigration issues.

The Emerald City Resource Guide complements online service listings that already exist by making the information immediately accessible to those who lack consistent access to technology.

According to Real Change Director Tim Harris, “I recently heard the story of a woman at a bus stop late at night, when she was approached by a young woman looking for a place to stay that night. The young woman didn’t have a cell phone, and by that time libraries were closed and she had nowhere to turn to look up local shelters. The first woman quickly searched through her phone, and was able to point the young woman in the right direction. If she had a guidebook, she said, she would have been able to hand the young woman a copy, connecting her to more support opportunities.”

“This is our vision on the Emerald City Resource Guide: a pocket-sized portal to change. As someone flips through the guidebook, looking for a shelter, maybe they’ll pass an entry on drug treatment services, or a job readiness program, and inspiration will spark.” – Real Change Director, Tim Harris

Read more about this new resource in Real Change News: Director’s Corner or The Seattle Times.

Representing yourself in court is a complicated process and can be overwhelming. In this workshop, you will learn the basics of the civil lawsuit process with a focus on court rules, court procedures, forms, scheduling, and deadlines. Attendees will be granted access to a password protected website with additional information and resources, including the most commonly used civil litigation forms.

Common civil lawsuit types include landlord tenant, family law, wills and probate, garnishment of wages, personal injury, and property disputes, just to name a few. This class does not cover immigration proceedings or criminal proceedings such as DUI or felony and misdemeanor offenses.

Please note that these changes will affect the Seattle library branch only.

Should you have any questions about these upcoming changes, please do not hesitate to contact us.

Today’s action undermines a fundamental principle of our democracy, and that is equal access by the public to government information. This action allows Internet Service Providers (IPSs) to block users, slow access, and charge more for certain content. In short, ISPs are now able to determine what information the public can access, what it cannot, and at what cost.

Without net neutrality, law libraries, whose crucial mission relies on the ability to provide users with equitable access to up-to-date online legal information, may not be able to pay the fees for preferred access. These users are not just attorneys but researchers, self-represented litigants, students and small business owners. Without net neutrality, ISPs will have the ability to stifle innovation and suppress free expression.

Net neutrality provides all Internet users with equal access to lawful content on the web, regardless of an ISP’s opinion of the material. AALL strongly urges Congress to act to reverse today’s ill-considered decision by the FCC.

Take Action for Libraries – What You Can Do:

On December 14, a majority of FCC commissioners voted to gut net neutrality protections that limit the power of Internet Service Proviers (ISPs) to block, throttle, degrade or preference some online content and services over others. This 3-2 vote to roll back strong, enforceable net neutrality protections was made in the face of widespread protests, millions of public comments and overwhelming opposition from across the political spectrum.

The FCC vote, though, is not the final word on this vital issue. The Congressional Review Act (CRA) gives Congress the ability and authority to nullify the FCC’s actions. Congress can and should vote to restore net neutrality and protect the free and open internet.

What you can do: Call and email your members of Congress today and ask them to use a Resolution of Disapproval under the CRA to repeal the recent FCC action and restore the 2015 Open Internet Order protections.

Inslee, Ferguson and legislators prepared to push back against damaging federal actions

On the eve of an expected vote by the Federal Communications Commission to roll back crucial net neutrality rules, Gov. Jay Inslee joined Attorney General Bob Ferguson, legislators, and business leaders to announce state plans to preserve an open internet and protect Washington consumers from internet companies that are not transparent about costs or services.

Big changes are afoot in the law library’s subscriber program, making it one of the best deals around.

“Let Us Do Your Research!”

With this new service you can hand off your research question to our skilled reference staff and we will provide a research memorandum with references to applicable law and resources.

Research services are billed at a rate of $100 per hour, in 15 minute increments.

More information can be found HERE.

One Hour of Additional Westlaw Time

You may have noticed that the law library significantly expanded our Westlaw subscription in 2017. In addition to our previous coverage of primary law from all state and federal jurisdictions, Washington Practice, law reviews and jury verdicts, we now have state and federal court filings, and the bulk of the West treatise collection.

Give us your known citation to a case, statute, law review or other document in our collection and we will deliver a copy to you electronically. Restrictions on the size of documents will apply.

More information can be found HERE.

This is a $60 dollar value based on current subscriber pricing!

Join Deborah Espinosa, documentary photographer and attorney, as she celebrates the conclusion of her collection, Living with Conviction: Sentenced to Debt for Life in Washington State at the Kent branch of the King County Library System on Friday, December 15th from 4pm – 6pm.

Living with Conviction: Sentenced to Debt for Life in Washington State will feature individuals sharing their personal stories of struggling to survive and thrive under court-imposed fines, fees, costs, and victim restitution, aka “Legal Financial Obligations” or “LFOs,” which accrue interest at a rate of 12%. Living with Conviction is the creation of documentary photographer and attorney, Deborah Espinosa. She believes that the purpose of law is to serve our communities and to level the playing field, and thereby create a more just society. The only way to know if a law is serving us is to listen to those most impacted. This project does just that.

Deborah’s photographs will be on display in the Kent library from December 2nd to December 14th.

The Kent library is located at 212 2nd Avenue North, Kent, WA 98032. Questions about this program and Deborah Espinosa’s collection should be directed to Carla McLean, Librarian for Adult Services (253) 859-3330. 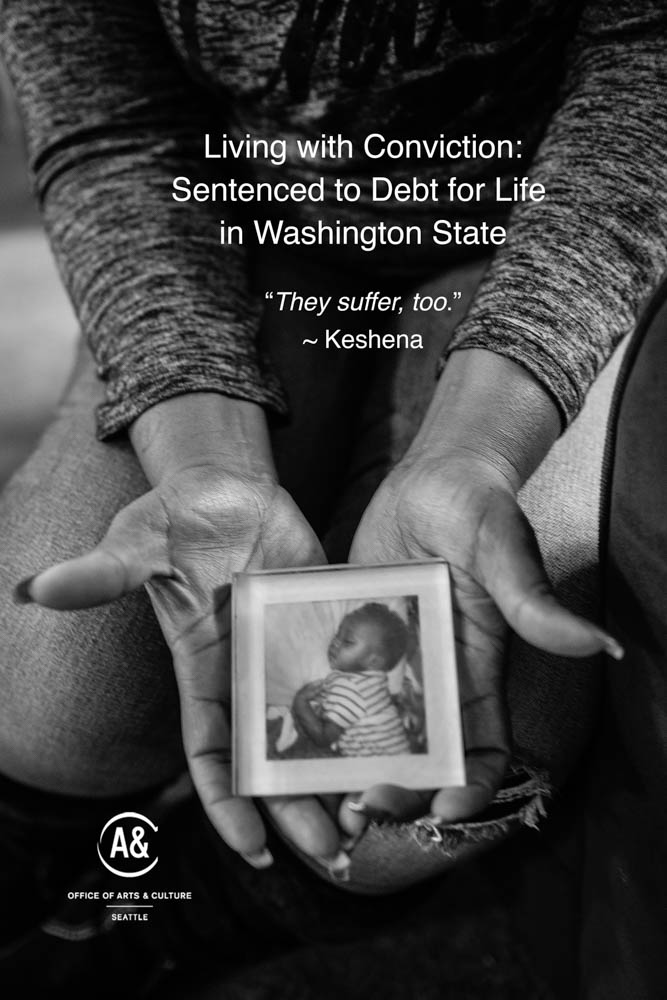