Moments of Joy – Art in the Law Library

Those who visited the downtown courthouse in the before times and entered on Third Avenue should be quite familiar with the murals that cover the first floor of the King County
Courthouse, but did you know there’s more public art to be seen in the building? In the Law Library we have over a dozen works by various artists throughout our space. When the courthouse and Law Library were remodeled back in 2004, the library staff worked with 4Culture to choose pieces that would t in our new space. We’ve added more pieces since the early aughts to fill even more of our large wall space.

Let’s take a tour of some of those pieces.

First, we’ll start at the reference desk where you’ll notice two traditional style rugs hanging on the wall. We get many questions and comments about these rugs. Most people assume they are old and precious, but the truth is they were bought out of necessity from a home goods store to tamper our voices from bouncing around the walls. I think they’ve served their purpose well in addition to looking like works of art.

Now let’s move on to the real art. The first two pieces I’d like to draw your attention to are the sister pieces by Michael Brophy called Past Present: King County Courthouse & Present Past: King County Courthouse. These pieces depict the changing view of the city through a window, presumably in the courthouse. These are the large gray scale pieces done in charcoal that are located on either side of the entrance. These two pieces were among the first to be commissioned for the remodel of the courthouse back in 2001. 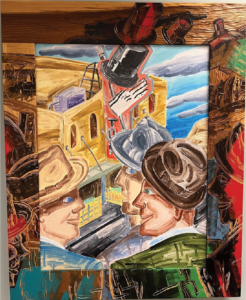 When you first walk into the library and look to your left, you’ll see a large colorful piece by Patrick Siler called The Meeting. This lithograph depicts three men wearing hats gathered. This piece is interesting in that the frame isn’t just a frame but is part of the art. The frame is carved and extends the scene depicted. This is probably the most colorful of the pieces in the library.

Another of the first pieces to be noticed when lingering near the reference desk or circulation desk is “The Lawyer” or should I say Super Lawyer. This linocut by Katherine Aoki was inspired by the Powerpuff Girls and is part of a series called Women as Superheroes based on their vocational skills. This is a fun piece that depicts a woman lawyer flying over the city, business card in hand!

Located behind the computers next to the windows is a large design that looks much like a question mark. Patrick Holderfield’s Untitled #91 appears to incorporate watercolor as well as charcoal and colored pencil drawings. I’m certain this work of art was chosen to represent the fact that libraries, historically, are where people bring their unanswered questions.

If you head for the three conference rooms on the north end of the library, you’ll pass a photo of a stack of red books. On the only non-red book spine it reads “People are Important.” This print is by Zack Bent and is called Preaching to the Choir. Next, you’ll run into a display case that holds Black Law Spiral, an intricate glass sculpture by Ginny Ruffner. This is the only sculpture in the library and one of my favorites. Just down the hallway from the sculpture is what I like to call the two heads. These two pieces depict the back of two bald individuals with different colored backgrounds. Both untitled pieces are by LA artist Salomon Huerta. The two heads are among the latest pieces added to our walls.

Tucked away on the wall heading towards the Washington state collection, you’ll see a large bright colorful piece called Hardangerfjord by Suzanne Caporael. Ms. Caporael was inspired by freighters in a Norwegian harbor and I think once you understand that you’ll be able to see the movement of the water in the lithograph and maybe even imagine boats bobbing in the water.

Near the state Supreme Court Briefs, you’ll find a painting of a teacup waiting to be filled by the steaming blue and white jug and maybe a cherry as a sweet treat. This painting, titled Jug, was done by local husband and wife duo Julie Paschkis & Joe Max Emminger. Though each artist has their own style they were able to collaborate and create a piece that looks seamless 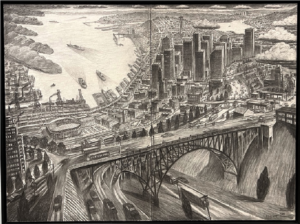 Finally, I want to draw your attention to a few pieces that are tucked away in conference rooms. The first, a charcoal drawing by Douglas Cooper, can be found in our Legal Research and Training Center. Mr. Cooper is also responsible for the murals on the first floor of the courthouse. The drawing is called South Seattle Bridge and depicts the Jose Rizal Bridge looking towards Elliott Bay. In conference room one, you’ll find a Brad Brown piece called Third Drift 46-54 which is made up of nine squares that are composed of different torn pieces of paper. In conference room six there’s a photo of a fountain surrounded by a fence with what looks to be signs leaning against it. Fountain #1 by Jeff Krolick reminds me of a reflecting pool where you might want to sit and enjoy the sunshine for a bit.

I once heard art described as a moment of joy in a home. We hope the next time you’re in the library you take a moment to enjoy a couple of the art pieces in our space. Keep an eye on our website for a video tour of the law library’s art collection. www.kcll.org.

Tamara Hayes is the law library’s technical services librarian and in-house art aficionado. She has worked at the library for 20+ years and is the glue that holds the place together.