Remembering Japanese Incarceration and the Lies of Executive Order 9066 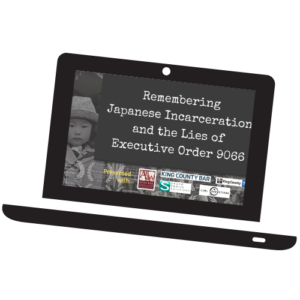 With the help of  our partners and sponsors, the King County Law Library is very proud to bring you this important recorded event. The roughly two-hour presentation consists of two parts:

Filmmaker Jon Osaki’s documentary “Alternative Facts: The Lies of Executive Order 9066” takes an in-depth look at the legal rationale and evidence that undergirded the issuance of Executive Order 9066, which led to the wartime incarceration of almost 120,000 persons of Japanese ancestry, and Korematsu v. United States (1944), the subsequent U.S. Supreme Court Case which upheld its constitutionality. Using historical footage, documents, and interviews, Alternative Facts covers the forces and players that brought E.O. 9066 into being, the work of researchers who uncovered evidence unmasking the manipulated record submitted to the Supreme Court in Korematsu, and the work of the attorneys pursuing coram nobis cases to vacate the convictions of Fred Korematsu, Gordon Hirabayashi, and Minoru Yasui.

After a screening of Alternative Facts, Serin Ngai, of Sound Family Solutions, PLLC, will lead a panel discussion with filmmaker Jon Osaki, King County Superior Court Presiding Judge Patrick Oishi, and Lori Bannai, Professor Emeritus, Seattle University School of Law, and Director Emeritus of the law school’s Korematsu Center. Professor Bannai was also an attorney on the legal team that won vacation of Mr. Korematsu’s wartime conviction. The panel will discuss the role of attorneys and the judiciary in Korematsu case, how these issues continue to impact the current legal and political climate, and how lawyers and judges can respond.

To view the recording, simply enter your information below and you will be given a link and password.